Lake George, nicknamed the Queen of American Lakes, is located at the southeast base of the Adirondack Mountains, in the northeastern portion of the U.S. state of New York. It lies within the upper region of the Great Appalachian Valley and drains all the way northward into Lake Champlain and the St. Lawrence River drainage basin. The lake is situated along the historical natural (Amerindian) path between the valleys of the Hudson and St. Lawrence Rivers, and so lies on the direct land route between Albany, New York and Montreal, Quebec, Canada.

The lake extends more than 32 miles on a north-south axis, is quite deep, and varies from one to three miles (1.6 to 4.8 km) in width, presenting a significant barrier to east-west travel. Although the year-round population of the Lake George region is relatively small, the summertime population can swell to over 50,000 residents, many in the village of Lake George region at the southern end of the lake. 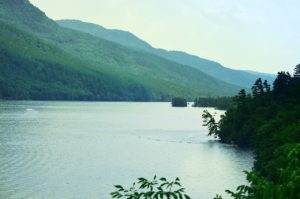 Lake George drains into Lake Champlain to its north through a short stream, the La Chute River, with many falls and rapids, dropping 226 feet in its 3.5 mile course—virtually all of which is within the lands of Ticonderoga, New York and near the site of the Fort Ticonderoga. Ultimately the waters flowing via the 106 mile long  Richelieu River drain into the St. Lawrence River downstream and northeast of Montreal, and then into the North Atlantic Ocean above Nova Scotia.

Lake George is located in the eastsouthern Adirondack State Park and is part of the St. Lawrence watershed. Notable landforms include Anthony’s Nose, Deer’s Leap, Diver’s Rock (a 15-foot [4.6 m] jump into the lake), and Double-Diver’s (a 30-foot [9.1 m] jump), the Indian Kettles, and Roger’s Rock. 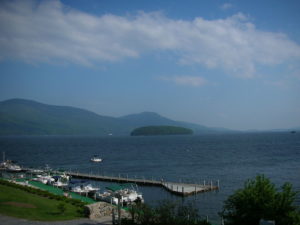 The lake is distinguished by “The Narrows”, an island-filled narrow section (approximately five miles [8 km] long) that is bordered on the west by the Tongue Mountain Range and the east by Black Mountain. In all, Lake George is home to over 170 islands, 148 of them state-owned. They range from the car-sized Skipper’s Jib to the larger Vicar’s and Long Islands. Camping permits are attainable for the larger portion of islands. 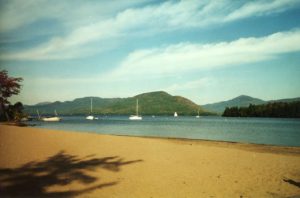 Situated on the rail line halfway between New York City and Montreal, Lake George attracted the era’s rich and famous by the late 19th and early 20th century. Members of the Roosevelt, van Rensselaer, Vanderbilt, Rockefeller and Whitney families visited its shores. The Fort William Henry Hotel, in what is now Lake George Village, and The Sagamore in Bolton Landing opened at this time to serve tourists. The wealthiest visitors were more likely to stay with their peers at their private country estates.

Things to do
Today   you can stay at Lake George hotels, of which many overlook Lake George. They are rustic and elegant, inviting you to let loose and enjoy your getaway. There are endless things to do in the region, ranging from hiking towering mountains, to swimming in refreshing lakes, to spending an enchanting day at an amusement park. Grab a mouthwatering bite to eat with your family or indulge in a romantic meal with the best view around at waterfront restaurants. A parasailing ride hundreds of feet over the royal blue water of Lake George can be the most invigorating vacation experience you’ve ever had. 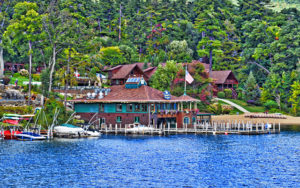 Beauty of Fall Foliage
Those seeking a restful vacation can discover leaf-peeping opportunities on hidden trails, silent waterways, and scenic drives. Bustling fall events like the World’s Largest Garage Sale, the Adirondack Film Festival, and local craft fairs work to awaken peaceful communities in the crisp autumn air. Cheerful fall festivals like Oktoberfest celebrate the warm afternoons and brisk nights of autumn with cold craft beers and peppy polka dances. The Lake George Area’s best attractions remain open throughout the fall, and free events fill out community calendars every weekend. And with plenty of fall lodging options in the area, it’s easy to stay close to the action. Whether you’re a first time visitor or make a trip every year, you’ve never seen a season like fall in the Lake George Area. 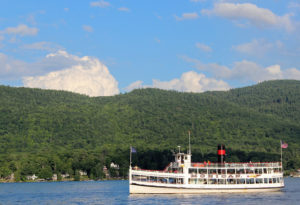 Popular Annual Lake George Events
The year begins with nature-related events such as Thurman Maple Days and the Hudson River Whitewater Derby. These events have an undeniable Adirondack flavor. Summertime has a spate of annual hits. Gearheads travel hundreds of miles to attend the Adirondack Nationals Car Show and the Americade Motorcycle Rally. Food-connoisseurs stroll from booth to booth tasting the area’s finest cuisine at the Adirondack Wine & Food Festival. Fall festivals abound with Oktoberfests, the Adirondack Balloon Festival and the World’s Largest Garage Sale drawing huge crowds every autumn. Even winter can’t stop the annual events. Winter Carnivals and Ice Bars pop-up all over the region to entertain those who brave the winter weather.