Lake Champlain is a beautiful natural freshwater lake in North America  which is partially inside Canada which borders the states of Vermont and New York. Lake Champlain is located in the Lake Champlain Valley between the Green Mountains of Vermont and the Adirondack Mountains of New York, drained northward by the 106 mile long Richelieu River into the St. Lawrence River at Sorel-Tracy, Quebec, northeast and downstream of Montreal, Quebec. It also receives the waters from the 32 mile long Lake George, so its basin collects waters from the northwestern slopes of the Green Mountains and the northernmost eastern peaks of the Adirondack Mountains.

The New York part of Champlain Valley includes the Eastern portions of Clinton County in Essex County.  Most of the area is part of the Adirondack Park system. There are many beautiful towns along the coastline of Lake Champlain. Plattsburgh is a city in New York and Burlington Vermont on the Lake’s Western and Eastern Shores. So is the town of Ticonderoga.  There are also more than 80 Islands in Lake Champlain which can be visited by boats and ferries; the largest include Grand Isle, Isle La Motte, and North Hero, all part of Grand Isle County, Vermont.

The northern half of Lake Champlain contains a wonderful patchwork of Islands. The largest of the Islands are interconnected with each other and the Vermont mainland by Route 2 in the south and Route 78 in the north. Following Route 2 from south to north will take you through the picturesque towns of South Hero, Grand Isle, North Hero, and Alburg just a few miles from the Canadian border.

The Lake Champlain Islands’ terrain is flat to gentle rolling hills, which means bicycling is a popular way to get around on vacation. In most areas you’ll have unobstructed views of Vermont’s Green Mountains to the east, and New York’s Adirondacks to the west.

Although Montpelier is the state capital of Vermont, its largest city is Burlington, which rests at Lake Champlain’s shoreline. I has beautiful backdrop to the east of the Green Mountains.

Activities in Burlington include ECHO, Vermont’s world-class lake aquarium and science center on the waterfront, Lake Champlain Chocolates guided factory tour, where you can see these famous chocolates made right before your eyes, and The Ethan Allen Homestead and Museum. Complete your day with a train ride through the beautiful Champlain Valley on the Green Mountain Railroad. The train travels through green pastures on the way to Shelburne and back.

Two cruise boats operate on Lake Champlain in the summer; The Spirit of Ethan Allen III, which can hold  500 people and the Northern Lights; which can hold 150 people. Both these boats leave from the docks in Burlington.

While cruising you can listen to tour guides describe Lake Champlain region’s history and the importance of the Native Americans of this area, and some very interesting facts about the Lake. Whichever cruise you take you will see beautiful views of the Islands and the surrounding mountains of Vermont and New York as well as southern Quebec.

Eight of these wrecks are preserved for the enjoyment of divers, and under the watchful eye of the Lake Champlain Underwater Historic Preserve. These wrecks offer a unique experience for northeast diving. The types of wrecks vary from a horse ferry to canal boats, with some located close to both the Vermont and New York shorelines of the Lake. Diving experience required ranges from beginner to advance.

The Lake Champlain Maritime Museum is located near Vergennes, and is a marvelous way to experience the historical significance of the lake. The museum at Basin Harbor provides opportunities to step back in time as you explore a Revolutionary War gunboat, watch craftsmen use traditional shipbuilding skills, and learn about nautical life in the Champlain Valley during the conflicts of the 18th century.

The Museum is self-guided but has plenty of demonstrations for you to stop and view as you wander around.

Within these Vermont State Parks are opportunities for hiking, biking, camping, boating, fishing, picnicking, and swimming. The parks are a wonderful way to relax and enjoy the waters of the Lake for a day or longer, and to hike trails in between a swim and reading your novel.

Lake Champlain’s region has rich history at Fort Ticonderoga and the 18th century fort ruins at Crown Point State Historic Site. Both have breathtaking scenery, and Fort Ticonderoga also adds historical reenactments, exhibits, a corn festival, and a corn maze to the mix.

Fall in the Adirondacks is perfect for leaf peeping, whether from your car on a scenic drive or while hiking on a CATS trail which have more  than 40 miles of trail, many of which are short, easy hikes to spectacular vistas of Lake Champlain to the east and the impressive Adirondack High Peaks to the west. You can book a tour at Ausable Chasm and explore their many trails as you listen — and feel — the thunderous echoes of the Ausable River.

Some of the most significant battles of the Revolutionary War took place along the lake at the Forts of Ticonderoga and Crown Point, of which both were regional strongholds. Artillery and war-era relics still reside in local museums. To fully immerse yourself in the history of the Lake Champlain Region, you can’t beat a trip to Fort Ticonderoga Or Crown Point Historic Site. Experience American history with these exciting reenactments. 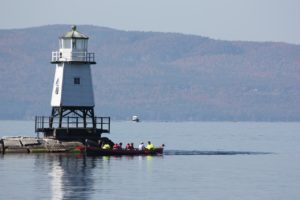 There are many parks in the Lake Champlain region in both New York and Vermont which are beautiful to visit. Those on the New York side of the lake include: Point Au Roche State Park, which park grounds have hiking and cross country skiing trails, and a public beach; and the Ausable Point State Park. The Cumberland Bay State Park is located on Cumberland Head, with a campground, city beach, and sports fields.